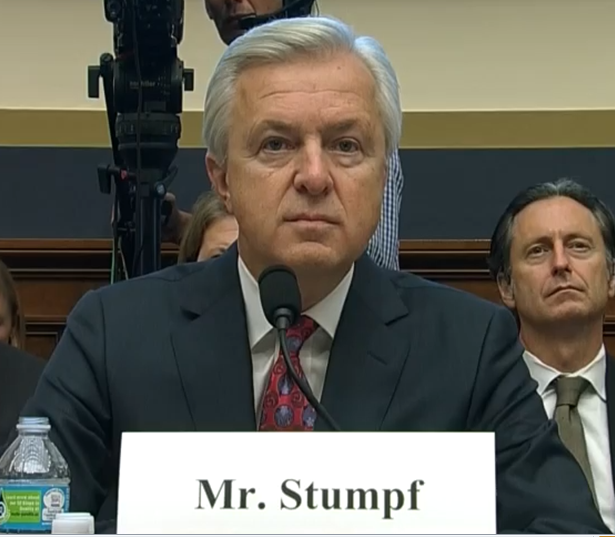 New York (CNN Business) ; Former Wells Fargo CEO John Stumpf on Thursday agreed to a lifetime ban from the banking industry and a $17.5 million fine for his role in leading the bank through its massive fake accounts scandal and other sales practice misconduct.

In addition to Stumpf, the US Office of the Comptroller of the Currency fined seven other former Wells Fargo (WFC) executives about $40 million in connection to what the OCC described as “the bank’s systemic sales practices misconduct.”
The civil charges brought by the federal agency say the executives “failed to adequately perform their duties and responsibilities, which contributed to the bank’s systemic problems with sales practices misconduct from 2002 until October 2016.”
“The misconduct of these individuals allowed the practices to continue for years, affecting millions of bank customers and thousands of lower level bank employees,” the OCC said in a statement.
Wells Fargo has already paid out about $4 billion in fines stemming from the wide-ranging sales schemes.
The bank has admitted its employees opened millions of fake bank and credit card accounts to meet wildly unrealistic sales goals. Wells Fargo has acknowledged that it forced borrowers to pay for auto insurance they didn’t need. Some of those auto borrowers ultimately had their vehicles repossessed. Wells Fargo has admitted to illegally repossessing the vehicles of hundreds of service members.
Wells Fargo said it accepted the government’s findings.
“The OCC’s actions are consistent with my belief that we should hold ourselves and individuals accountable. They also are consistent with our belief that significant parts of the operating model of our Community Bank were flawed,” said Wells Fargo’s current CEO Charles Scharf in a statement on Thursday. He added that the bank “will not make any remaining compensation payments that may be owed to these individuals while we review the filings.”
Scharf became CEO in October, following a six-month struggle to find a replacement for former head Tim Sloan. Sloan held that job from late 2016 until last March, exiting the bank after failig to convince lawmakers and regulators that the bank had significantly changed its culture.
Stumpf, who worked at Wells Fargo before retiring as ceo in 2016 as the bank’s scandals came to light, had previously forfeited $70 million in compensation. He did not immediately respond to a request for comment about the civil charges or the penalty.
The allegations of improper sales tactics and persistently low interest rates have weighed on the bank’s financial results. Wells Fargo last week reported fourth-quarter profits fell 50%. The bank’s net income more than halved to $2.9 billion in the final three months of 2019, compared with $6.1 billion in the same period the year prior.
FORMER WELL FARGO CEO John Stumpf WELL FARGO